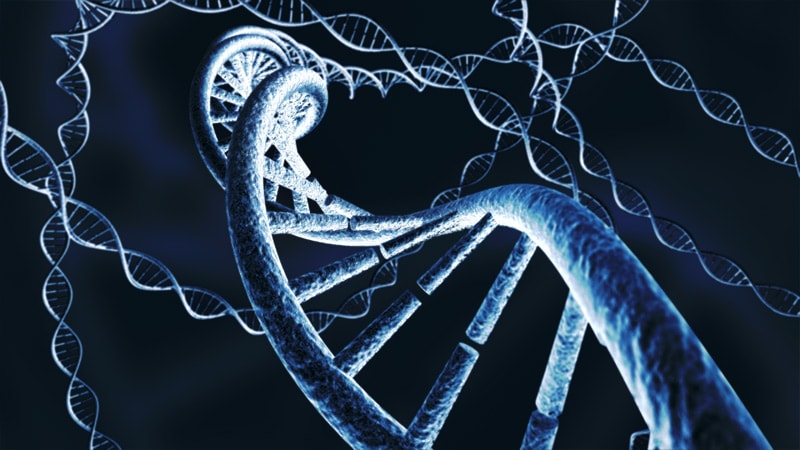 “Pathogenic [protein-truncating variants and pathogenic missense variants] in these … susceptibility genes were disproportionately associated with more aggressive breast caner, particularly among younger women,” they wrote, noting that carriers of rare genetic variants in the nine genes comprised more than 27% of women diagnosed at age 40 or younger with triple-negative disease (driven mainly by BRCA1) and about 16% of those diagnosed with hormone receptor (HR)–positive, HER2-negative high-grade disease.

All together, the nine genes were associated with 14.4% of tumors in women aged 40 years and younger, but less than 4% in women over age 60 years, and among younger women, the prevalence of variants combined was higher in those with triple-negative and HR-positive, HER2-negative disease versus other subtypes, they said.

The findings were published online on Jan. 27, 2022, in JAMA Oncology.

Study subjects were women aged 18-79 years who were sampled, independently of family history, from 38 international population- or hospital-based studies conducted between 1991 and 2016.

Substantial heterogeneity was observed in the distribution of intrinsic subtypes by gene. For example, RAD51C, RAD51D, and BARD1 variants were associated mainly with triple-negative disease (odds ratios, 6.19, 6.19, and 10.05 respectively), and CHEK2 variants were associated with all subtypes (with ORs ranging from 2.21-3.17) except for triple-negative disease, the authors found.

“For ATM variants, the association was strongest for [HR-positive, HER2-negative]high-grade subtype (OR, 4.99). BRCA1 was associated with increased risk of all subtypes, but the ORs varied widely, being highest for triple-negative disease (OR, 55.32),” they wrote.

BRCA2 and PALB2 variants were also associated with triple-negative disease, TP53 variants were most strongly associated with HR-positive, HER2-negative and HR-negative, HER2-positive subtypes, and tumors occurring in pathogenic variant carriers were of higher grade, they added, noting that for most genes and subtypes, a decline in ORs was observed with increasing age.

All genes except CHEK2 were more strongly associated with high-grade disease.

These and other findings from the study can “inform guidelines for eligibility for gene panel sequencing and breast cancer surveillance in the general population,” the authors explained, adding that tumor characteristics can also be used to determine whether variants of uncertain significance are likely to be pathogenic.

The data should therefore “improve the precision of variant classification algorithms and extend them to a larger set of genes,” they noted.

“This case-control study suggests that rare variants in BC susceptibility genes display marked heterogeneity with respect to tumor phenotype, but also similarities between genes that are consistent with known biological functions. This present study provides detailed quantification of subtype-specific breast cancer risks; these can potentially improve risk prediction models and breast cancer prevention strategies,” they concluded.

More specifically, women found to be carrying variants in these genes may be offered enhanced screening, including by MRI, risk-reducing surgery, chemoprevention, and genetic counseling, corresponding author Nasim Mavaddat, MBBS, PhD, explained in an interview.

The findings “enhance our understanding of breast cancer biology and aid efforts to classify whether genetic variants of uncertain significance are also likely to be pathogenic,” added Dr. Mavaddat, a senior research associate at the University of Cambridge (England).

She also said the investigators are taking steps to include the results in “CanRisk,” a cancer risk prediction model used by genetic counselors and other clinicians, and are “exploring whether variants in these genes are associated with contralateral breast cancer risk and survival after a breast cancer.”

As most participants were European, analyses should be extended to women of other racial and ethnic groups, she added.