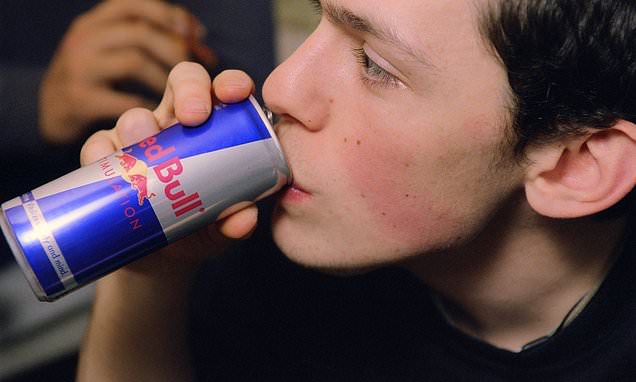 Children could be banned from buying energy drinks and takeaways barred from opening near schools under Welsh obesity-fighting plans.

The Welsh Government wants to fight the country’s bulging waistline, with almost half of the nation’s 3million people considered overweight.

With a quarter of children classified as being too fat by the time they start primary school, ministers hope new interventions can help them from spending the rest of their lives obese.

Banning the sale of energy drinks, which can contain up to 21 teaspoons of sugar and have the same amount of caffeine as three cups of coffee, to under-16s is just one measure being considered.

Another is changing planning rules to consider proximity to schools and colleges when approving new takeaway outlets.

Others include restricting the promotion of foods high in fat, sugar, salt as well as ending free refills on sugary drinks and expanding the publication of calories on menus, similar to measures that have been brought in or were planned for England. 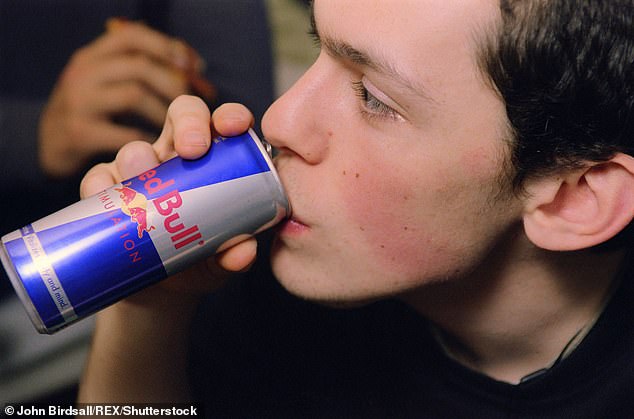 Barnsley has joined a string of obesity-fighting councils by banning junk food ads on all public buildings.

The South Yorkshire council said it will restrict adverts for food high in fat, sugar and salt to ‘protect’ children and adults from seeing displays which can ‘influence what people eat and drink, as well as how much’.

It will apply to products such as cakes, biscuits and crisps.

A third of youngsters and two-thirds of adults are overweight in Barnsley, which is in line with the UK as a whole.

The local authority is the sixth in the country to restrict unhealthy advertising, which campaigners say removes the spotlight from junk food.

Experts found the same policy on the London underground, rail and bus network led to households in the capital eating 1,000 fewer calories per week.

Julia Burrows, Barnsley’s director of public health, said the move will ‘make it easier to be healthy’.

Deputy minister for mental health and wellbeing Lynne Neagle said the Government was aware the cost of living crisis might make people hesitant about anti-obesity measures that could put added costs on some food and drinks.

‘Often, foods that are sugary or high in fat or salt are more readily available and promoted, making it harder for people to make the healthy choice,’ she said.

‘We know this is a difficult time for people with the growing cost of living crisis putting huge pressure on people financially.’

But she insisted that action needed to be taken to save people from disease and death caused by eating too much unhealthy food.

‘We need an open and frank conversation about how we can create a step change in our choices and behaviours.

‘We are talking about reversing significant issues which have built up over generations in our food environment.’

The cost of living crisis was cited by No10 as a reason for delaying a number of anti-obesity initiatives in England.

They have been linked to an increased likelihood of using alcohol or smoking as well as being more irritable and being excluded from school.

This same research, by University of York and University College London earlier this year, also found one in three British children are consuming caffeinated energy drinks at least once a week,

The NHS already advises that that energy drinks should not be consumed by young children.

More than 42million adults in the UK will be overweight or obese by 2040, according to new projections by Cancer Research UK 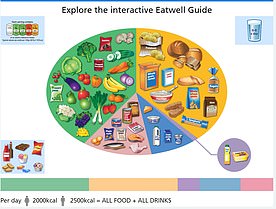 Meals should be based on potatoes, bread, rice, pasta or other starchy carbohydrates, ideally wholegrain, according to the NHS

• Base meals on potatoes, bread, rice, pasta or other starchy carbohydrates, ideally wholegrain

• 30 grams of fibre a day: This is the same as eating all of the following: 5 portions of fruit and vegetables, 2 whole-wheat cereal biscuits, 2 thick slices of wholemeal bread and large baked potato with the skin on

• Eat some beans, pulses, fish, eggs, meat and other proteins (including 2 portions of fish every week, one of which should be oily)

• Choose unsaturated oils and spreads and consuming in small amounts

A Welsh Government diet and nutrition survey published in 2019 also found young people aged between 11 and 18-years-old in the country are consuming up to three times the recommended maximum amount of sugar.

NHS guidelines say children this age, like adults, shouldn’t consume more than 30g of sugar per day, equivalent to about seven teaspoons.

The UK Government announced plans to ban sales of energy drinks to children in 2019 but have still not placed it into legislation.

Meanwhile, several supermarkets, including Tesco and Adsa, joined a voluntary ban on sales.

However, reports have since claimed retailers are not enforcing the self-imposed ban.

‘Our members do not market or promote energy drinks to under 16s, nor do they sample products with this age group,’ he said.

‘In addition, energy drinks carry an advisory note stating “Not recommended for children.”‘.

The Welsh consultation will run until September 1.

Some of measures being considered echo those that were planned for England but have since been delayed.

Prime Minister Boris Johnson decided to scrap a ban on ‘buy one get one free’ junk food deals and a 9pm watershed for sugary snacks in a bid to help poorer families with the cost of living crisis.

The initiatives were scheduled to start on January 2023 but proved deeply unpopular with Tory backbenchers.

One measure that was introduced however was calorie labelling.

It means businesses with 250 or more employees in England, including cafes, restaurants and takeaways, must display the calorie information of non-prepacked food and soft drinks.

Restaurant bosses and campaigners have slammed the timing of the new rules, arguing it will put pressure on an already struggling sector that was hammered by Covid lockdowns and restrictions.

Being overweight or obese is known to increase the risk of at least 13 different types of cancer and also causes other dangerous conditions such as high blood pressure and type 2 diabetes.

Treating obesity-related illness is estimated to cost the NHS £6 billion a year.

In the US an estimated 73.6 per cent of adults are considered either overweight or obese.

ENERGY DRINKS – ARE THEY SAFE?

There has been a stark rise in Britons’ thirst for caffeinated drinks – at least 600 million litres are drunk every year, 200 million more than ten years ago.

Some 55 per cent of those aged between 12 and 24 years old suffer everything from vomiting and chest pains to even seizures from the drinks, despite most consuming less than the recommended one-to-two beverages a day, a Canadian study found.

Previous research has linked energy drinks, such as Red Bull, to obesity, heart abnormalities and even sudden death due to their high-sugar and caffeine content.

Most energy-drink consumers are unaware of the products’ main ingredients, health implications or appropriate serving sizes, experts have said.

How much caffeine do they contain?

A 250ml serving of a typical energy drink – half the standard bottle or can size – contains 80mg of caffeine per litre – twice as much as a regular cola drink, but the same as a 60ml espresso.

Experts have warned that caffeine-packed energy drinks could be fuelling a record rise in diagnoses of irregular heartbeats, one of Britain’s biggest killers.

Just one energy drink daily could trigger arrhythmia, an abnormal heart rhythm which increases the risk of stroke five-fold.

It is thought that this is because excessive caffeine consumption dramatically increases the amount of calcium released within the heart’s cells, disrupting the electrical rhythm.

Experts also warn the addition of high quantities of sugar in energy drinks could be a reason for their potency.

How much sugar do they contain?

Campaigns, such as Action on Sugar have called for a complete ban on the products for under 16s.

Their study in December 2017 found the average sugar content was more than an adult’s entire maximum daily recommendation for sugar intake in the UK.

Likewise, 78 per cent of products exceeded the maximum daily recommendation for sugar intake for a child aged seven to ten 10 years – 24 g or six teaspoons.

Certain manufacturers reformulated before the Soft Drinks Industry Levy in April 2018 in the UK.

Before reformulation in 2017, the Punched Energy and Tropical Guava Flavour products from Rockstar, contained a staggering 78g, or 20 teaspoons, of sugar per 500ml serving – more than three times the daily recommendation of 25g for women and 38g for men.

Now, these drinks contain 24g of sugar per 500ml, the equivalent of six teaspoons per 500ml.