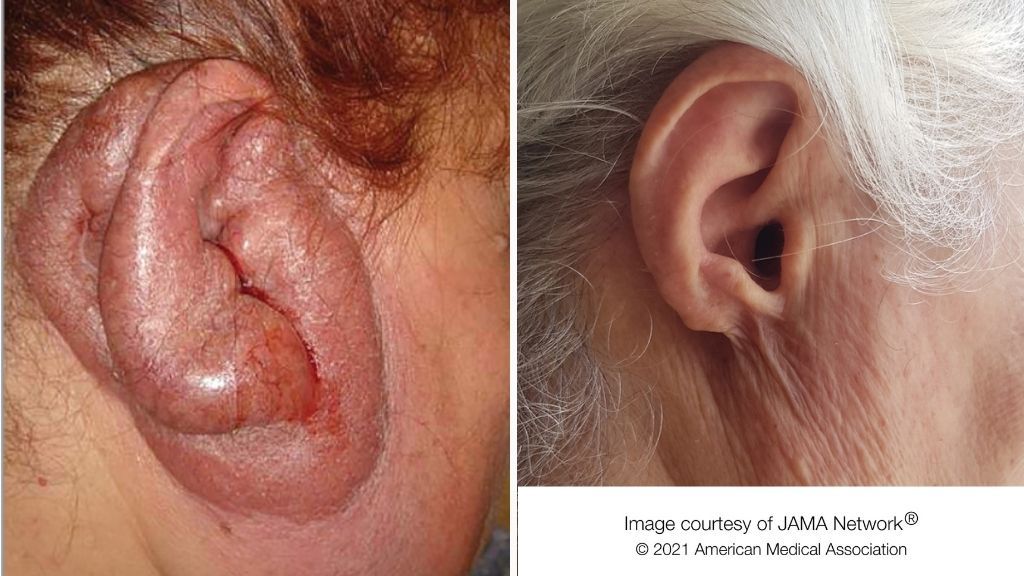 A woman in her 50s was diagnosed with a case of “turkey ear,” in which a tuberculosis infection of the skin caused her right ear to progressively swell over many years until it reached an enormous size.

The term turkey ear specifically refers to an infection of the earlobe that causes the skin to turn reddish, bumpy and hard to the touch; the comparison to turkeys may be a reference to the birds’ fleshy, bumpy necks, but the case reports don’t specify which feature inspired the name.

In the woman’s case, the infection started in childhood and slowly progressed over time, turning the swollen ear a reddish-brown color, according to a report of the case published March 3 in the journal JAMA Dermatology.

An examination, conducted at a medical center in Israel, also revealed that regions of the woman’s ear had taken on an “apple jelly appearance,” literally meaning that the color resembled that of a jelly made from cooked apples, the authors wrote. The term “apple jelly” also refers to the texture of the raised nodules of infected skin, which feel gelatinous when touched, according to a 2013 report in the journal Infectious Diseases in Clinical Practice.

“She was adamant that the lesion had been present since early childhood but had gradually increased” and had begun to leak a foul-smelling discharge, the authors wrote.

The woman originally went to the clinic in 2008 and received two months of treatment with four antibiotic medications for the turkey ear; the treatment was then cut back to two medications for the following seven months. The infection had been improving with treatment, but she did not follow up until 2020, when doctors had a chance to reexamine her, the authors wrote. Her infection had completely resolved, and the ear had shrunk back to a normal size. Only a patch of scarred skin remained as a mark of the infection.

Tuberculosis infections of the skin are caused by the same bacterium that infects the lungs, known as Mycobacterium tuberculosis, according to the case report. It’s relatively rare for the bacterium to infect the skin, though, as compared with other infection sites outside the lungs, such as the lymph nodes, according to a 2012 report in the Indian Journal of Dermatology.

The infection usually occurs when M. tuberculosis migrates to the skin from elsewhere in the body, often via the blood or lymphatic system. Very, very rarely, the condition can set in after a person receives the Bacillus Calmette-Guérin (BCG) vaccine, intended to prevent tuberculosis, the authors noted. This unusual complication is estimated to occur in only 5 out of every 1 million of these vaccinations, according to a 2016 report in the journal Case Reports in Dermatology.

—The 10 weirdest medical cases in the animal kingdom

The BCG vaccine is not widely used in the United States, where control measures have effectively reduced the risk of infection, but the vaccine is still commonly given to infants and children in countries where the condition remains common, according to the Centers for Disease Control and Infection (CDC).

“The chronic, relatively asymptomatic nature of [lupus vulgaris] may cause a significant delay in diagnosis,” the authors noted. In fact, the authors found several other case reports describing patients who had lupus vulgaris for decades before being diagnosed.

In general, tuberculosis of the skin has “become rare in past decades,” but the disease could still crop up in unexpected places as people emigrate from regions where tuberculosis is endemic, the authors wrote. Therefore, dermatologists worldwide should still consider lupus vulgaris as a possibility if they encounter patients with turkey ears or apple jelly nodules, they wrote.