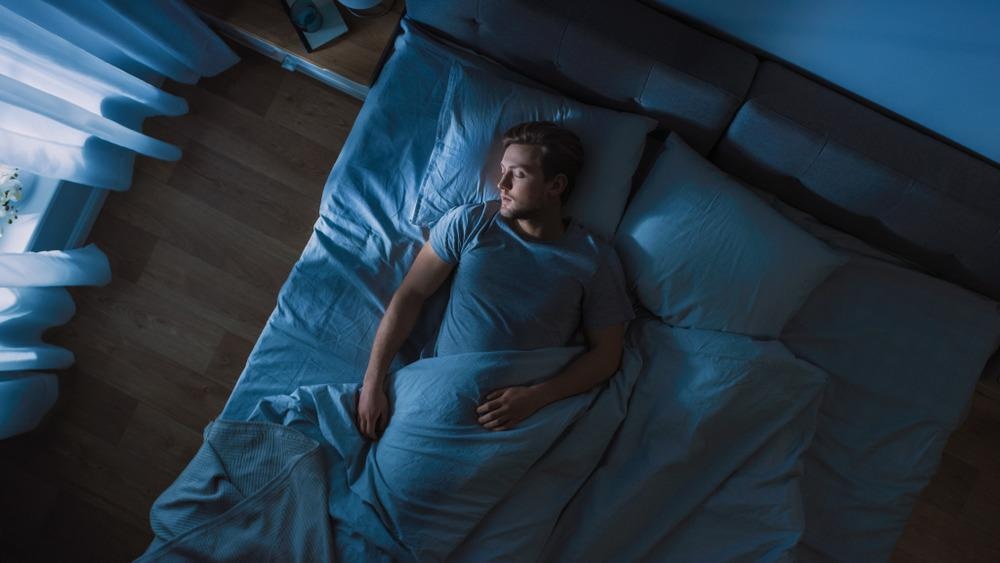 Sleep is known to affect several systems and processes in the body. Overarchingly, sleep deprivation is associated with negative health consequences.

What is considered to be appropriate sleep?

The average number of hours of sleep required for an adult is between 7–9 for optimal health. However, a considerable number of adults do not meet this requirement.
A study conducted in 2012 demonstrated that 29.2% of men achieved an average of 6 hours or less of sleep each evening. the institute of Medicine further estimates that between 50 and 70 million Americans suffer from a chronic sleep disorder; this epidemic is associated with societal changes which include increased reliance on technology, increased working hours, and poor sleep hygiene.

The relationship between health and sleep is bi-directional. There are several medical conditions associated with inadequate or disrupted sleep which include restless leg syndrome, insomnia, hypogonadism, sleep apnea, and depression.

Combined with independent risk factors such as age, body mass in tax, mental health conditions that affect the perception of symptoms such as depression, and clinical characteristics, sleep functioning can moderate clinical symptoms and impact the quality of life experienced by patients.

In the same study, a similar condition that disrupts sleep, sleep apnea, was studied in relation to erectile dysfunction. In a randomized sham-controlled trial, a total of 61 men were assigned to groups to investigate whether the use of continuous positive airway pressure (CPAP) could improve erectile function in men who suffered from both erectile dysfunction and obstructive sleep apnea.

These results suggest that in men with obstructive sleep apnea, sleep quality contributes to the condition, and may not respond to first-line treatment for erectile dysfunction with a PDE5 inhibitor; suggesting that in fact, correcting the underlying sleep impairment could produce more significant improvement in erectile dysfunction.

Alongside obstruction to breathing, non-standard shift work that has a significant effect on sleep has been shown to impact erectile dysfunction. A correlation between insomnia and erectile dysfunction has been confirmed by several studies. Some of these studies suggest that the correction of poor sleep in isolation may lead to a clinical improvement in manifestations of erectile dysfunction. This body of research continues to grow.

The urge to urinate is often exacerbated during the night, which leads to disrupted sleep and a decrease in overall sleep quality. A survey conducted on 5335 men who were diagnosed with lower urinary tract symptoms demonstrated that only 13% reported continuous sleep periods of more than two to three hours, illustrating the degree to which urinary tract symptoms can affect sleep.

Other studies have verified an association between lower urinary tract symptoms and other sleep-affecting conditions. For example, men with obstructive sleep apnea are more likely to experience urinary tract symptoms compared to those who do not. The severity of obstructive sleep apnea in this context has been found to correlate the most strongly with daytime frequency, urgency, and frequency of nocturia.

CPAP machines have been found to reduce lower urinary tract symptoms in those with obstructive sleep apnea. For example, a man with both lower urinary tract symptoms and obstructive sleep apnea who implemented CPAP for 12 months showed a significant increase in bladder compliance, as well as decreases in nocturia frequency and nighttime urination volumes.

Insomnia is also considered to be an aggravator of lower urinary tract symptoms as well as non-standard shift work.

Several studies have demonstrated that sperm counts have been decreasing over the past 40 years (50 to 60%). Unlike the linear correlation between erectile dysfunction and sleep, the relationship between sleep and male fertility is less clear.

Evidence suggests that an inverted U shape relationship exists, meaning that excessive and insufficient sleep are equally associated with reduced fertility. In a study of 198 infertile men, this relationship was found. However, interestingly no differences in semen volume, sperm motility, luteinizing hormone, or follicle-stimulating hormone were observed.

An additional study found via testicular biopsies in idiopathic infertile men that full circadian disruption – as manifested by too little or too much sleep – may affect the oxidation state of the testicle, shifting spermatogenesis.

Despite these correlative studies, no studies have assessed the impact of obstructive sleep apnea on fertility. With regards to non-standard shift work which impairs sleep quality, this has been suggested to impair spermatogenesis, although findings from studies have been inconsistent: some studies have demonstrated that men performing shift work had higher odds of experiencing infertility, while others have found no effect.

Alongside these, poor sleep is associated with a higher risk of several health problems that affect the quality of life including but not limited to cognitive impairment, social impairment, mood disturbances, and an increased risk of cardiovascular disease and associated manifestations such as atrial fibrillation.

Hidaya is a science communications enthusiast who has recently graduated and is embarking on a career in the science and medical copywriting. She has a B.Sc. in Biochemistry from The University of Manchester. She is passionate about writing and is particularly interested in microbiology, immunology, and biochemistry.