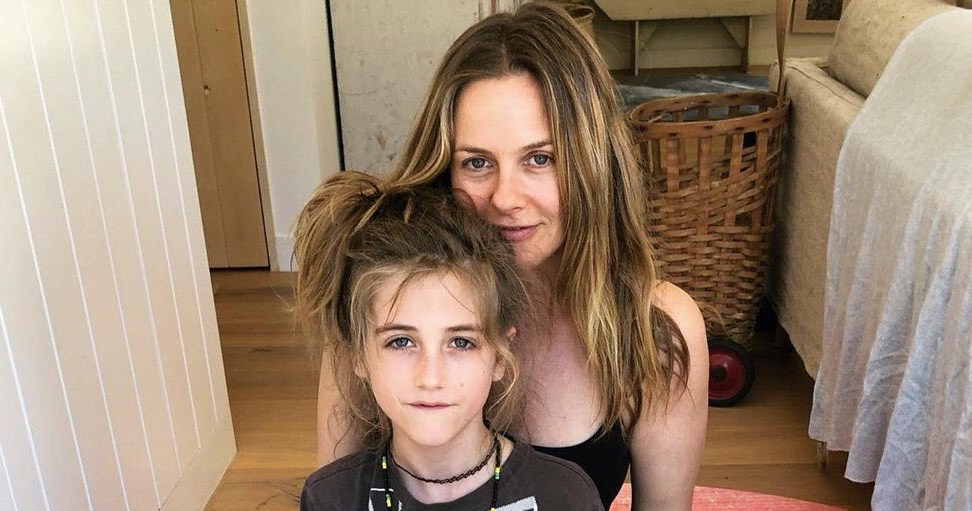 All natural! Alicia Silverstone has no regrets about raising her 9-year-old son, Bear, on a vegan diet — especially because it keeps him healthy year-round.

“He’s such an example of health. This is a child who is plant-based,” the 44-year-old Clueless star told Entertainment Tonight on Thursday, December 17. “To never have needed antibiotics in nine years and to never have needed any kind of medical intervention … Most kids have so many ear infections, they’re taking medicine all the time.”

Silverstone clarified that she’s not against giving her child a prescribed treatment if he was seriously ill. “I’m not saying I wouldn’t give it to him,” she said. “I’m saying he doesn’t need it. … This is a kid who’s been [sick] twice in his life. Twice. For, like, a few hours. He said, ‘Mommy, I don’t feel good. I’m going to lay down.’ In his whole life, twice. He can get a snot nose, but he’s still climbing trees.”

The Batman & Robin star proudly displays her son’s healthy demeanor on social media and believes that children who are raised on plant-based diets “can do better” than people would expect. “He’s just so healthy,” she continued. “I just want to share that with the world, so people can see that a plant-based baby is really healthy.”

‘Clueless’ Cast: Where Are They Now?

Silverstone shares Bear with ex-husband Christopher Jarecki, from whom she split in 2018 after more than a decade of marriage. Earlier this year, the Kind Diet author opened up about how encouraging a vegan diet in her household has made parenting her son a little easier.

“I can tell you that from the get-go, I think of him as a brown rice baby because I ate brown rice when he was conceived, when he was in my belly and when he was on my boob, and now he eats brown rice,” she recalled during a virtual #BlogHer20 Healthy at Home event in May. “The centering, grounding energy of that nourishment in his organs has left him such a calm boy. … I don’t have to yell or scream or discipline. None of that is necessary. All I have to do is say, ‘Oh, Bear, no thank you,’ and he goes, ‘OK, mom.’ He’s got it.”

The Crush actress’ unique parenting philosophy has sparked plenty of debate on social media in recent months. In June, she revealed in an interview with The New York Times that she and Bear “take baths together.” Three months later, she defended her son’s “beautiful” long locks after he “was made fun of by other kids.” Bear got a buzz cut in November — and Silverstone still isn’t quite used to his new look.

“It was down to his waist. … I saved [the hair] to be saved forever. He’s adorable and he’s happy, and it’s all good. He’s adorable with hair, he’s adorable without hair,” she told Access Hollywood earlier this month. “It’s a big growing up moment for a mom because I didn’t realize how when they talk their hair off, how much it changes [them]. He looks like a kid instead of my baby.”