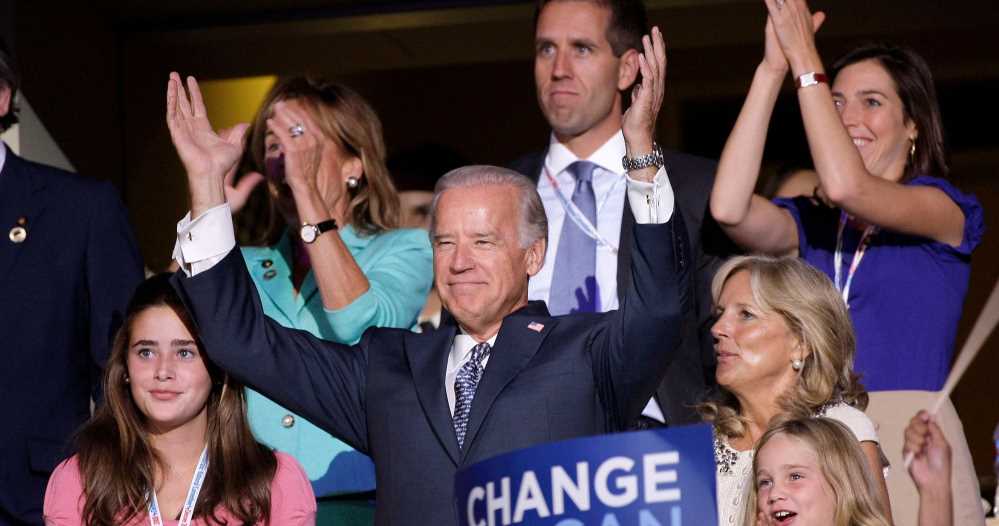 Pops is the President-elect! Joe Biden — who won the 46th presidential election in November 2020 — has shared many sweet moments with his family members along the course of his political career.

The former Vice President wed Neilia Hunter in August 1966, and they welcomed three children together — Joseph “Beau,” Robert Hunter and Naomi. The Pennsylvania native had his wife and kids’ support when he ran for senator in Delaware in 1972, but Neilia and their youngest daughter died one month after his win in a car accident that left both of his sons injured.

While Joe was tempted to resign from his position and care for Beau and Hunter, Senate majority leader Mike Mansfield “would not give up” on the Syracuse University grad.

“He kept calling to check on me,” Joe recalled in his 2007 Promises to Keep memoir. “He reminded me that he had put me on the Democratic Steering Committee, the group that chose the committee selections, which was unheard of for a freshman senator at that time. There was a fight brewing over a new slot on Finance, and he needed my help. I really did not care. He was trying so hard to engage me in something outside that hospital room.”

The politician was eventually convinced and commuted home from Washington, D.C., every day to see his sons. He remarried in June 1977, marrying Jill Biden (née Jacobs). The couple are the parents of daughter Ashley.

While serving in the Senate, the Promise Me, Dad author ran for president in 1988 and 2008. After withdrawing from his second bid, Joe was selected as Barack Obama‘s running mate. The pair served two terms together, from 2009 to 2017. During their second, Joe’s eldest son died of brain cancer.

“He did in 46 years what most of us couldn’t do in 146,” Obama said while delivering the eulogy at Beau’s funeral in 2015. “He left nothing in the tank. He was a man who led a life where the means were as important as the ends. And the example he set made you want to be a better dad, or a better son, or a better brother or sister, better at your job, the better soldier. He made you want to be a better person.”

Joe ran for president for the third time in 2020 with Kamala Harris as his running mate, beating incumbent Donald Trump and Mike Pence in November, according to the Associated Press.

“I am humbled by the trust and confidence you have placed in Kamala Harris and me,” Joe wrote in a statement at the time. “We’re reminded tonight of all those who fought so hard for so many years to make this happen. It is long overdue, but once again, America has bent the arc of the moral universe towards justice.”

Joe’s granddaughter Naomi adorably shared a photo of the moment that they found out about his win. Keep scrolling to see more of their family moments over the years.