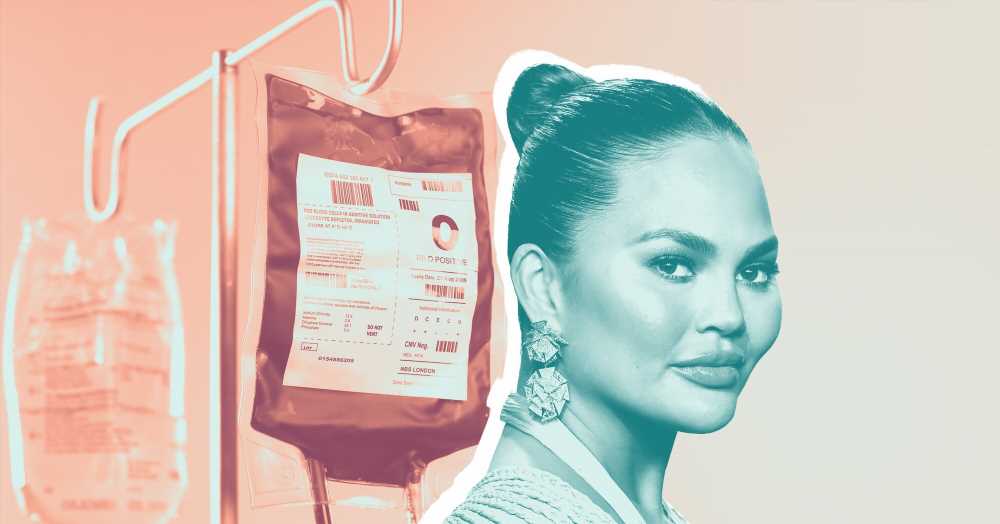 Just one day after being hospitalized due to excessive bleeding from a ″weak placenta,″ Chrissy Teigen revealed that she had two blood transfusions on Monday.

Teigen, 34, who's expecting her third child with husband John Legend, shared a photo to Instagram—an old image from a previous New Year's Eve party—to share the news. ″Hello from hospital. About to have my second blood transfusion which truly truly truly sounds more dramatic than it is,″ she wrote in her caption.

″It's an IV, but instead of fluids, the blood of some kind human being out there,″ she said. ″Baby and I are completely fine, just missing the little things like walking…cooking…playing with the other buttbutts. Came across this little gem from ringing in 2020. It all makes sense now!″

Teigen later opened up a bit more about her situation on her Instagram Stories. ″I got some blood from somebody, so if you donate blood, it goes to actual people. People that might be me,″ she said.

For anyone who's never had a blood transfusion, Teigen explained what it feels like, at least to her. ″I kind of feel like I definitely have somebody else inside me right now, which is an odd feeling to have,″ she said. She added that she also had Benadryl medication after the transfusion ″just in case I have an allergic reaction to the blood."

We don’t know exactly why Teigen got the blood transfusions—after her hospitalization on Sunday night, she shared that ″in the simplest of terms we can say my placenta is really, really weak,″ but added for her followers to keep their diagnoses to themselves. ″If you are a doctor, I cannot express enough how badly I would like for you to stop your guessing games or Twitter pleas to figure out what I'm doing wrong or diagnosing me via Twitter. You have to trust me that I have very good doctors that know what they're doing, that know the entire story.″

What’s a blood transfusion, and why might you need one during pregnancy?

A blood transfusion always sounds frightening—especially so if a woman is pregnant, but there are several factors, including non-emergency and emergency situations, that could be going on.

But first: An explanation as to what a blood transfusion actually is. According to the National Heart, Lung, and Blood Institute (NHLBI), a blood transfusion is a ″common, safe medical procedure in which healthy blood is given to you through an intravenous (IV) line that has been inserted in one of your blood vessels."

Regarding a blood transfusion during pregnancy, the American Pregnancy Association (APA) says the two main reasons one's needed is either severe anemia or hemorrhaging at some point during the pregnancy.

Anemia may be caused by iron deficiency or acute blood loss, per The American College of Obstetricians and Gynecologists. If your doctor suspects you might be deficient in iron during pregnancy, the first step is to carry out a hemoglobin test to measure the amount of hemoglobin in your blood. (Hemoglobin is a protein in your red blood cells that delivers oxygen to your body's organs and tissues and carries carbon dioxide from your organs and tissues back to your lungs.)

According to the Mayo Clinic, the normal hemoglobin range for women is 12.0 to 15.5 g/dl (grams per deciliter). If you have a hemoglobin count lower than 7 g/dl and are 34 weeks along in your pregnancy or more, the possibility of transfusion will be discussed. It’s crucial that severe anemia is effectively treated before labor, says the APA.

Hemorrhage is the medical term for bleeding, but it’s most often used to describe excessive bleeding, per MedlinePlus. It can happen at any time during pregnancy, and a transfusion may be required to counteract blood loss.

What happens during a blood transfusion if you’re pregnant?

During the process, a doctor will first test your blood to find a matching donor. Blood is then administered via a small tube inserted into a vein, typically in the hand or arm. Once the tube is inserted, approximately one-third of a liter of blood from a bag moves through a drip into your body. The whole process takes around three hours, per the APA.

Are there any side effects of a blood transfusion during pregnancy?

The NHLBI says blood transfusions are among the most common medical procedures in the nation and are very safe—but, as with any procedure, they still come with some risks for anyone, and pregnant women are no different.

Though you'll be closely monitored during a pregnancy blood infusion, some minor side effects can include a headache, rash, or fever, per the APA. More serious complications can include difficulty breathing, a severe headache, or sudden drop in blood pressure.

Luckily, in Teigen's case, she appears to be handling the blood transfusions just fine (after her Instagram Stories updates, she showed herself eating a chocolate ice cream cone, sifting through a bag of candy, and eating a chocolate pudding pie).

And in her previous Instagram Stories takeover, she also reassured her followers that her growing baby boy is actually thriving, despite her own pregnancy complications. “The baby is so healthy, growing stronger than Luna or Miles,” she said in her Instagram Story, as reported by PEOPLE. “He moves a lot. He's moved so much earlier than they ever did. He's like a rollie pollie. We have like a million great pictures of him. He's just so different than they were. So he's so strong and I'm just so excited for him because he's so wonderful and just the strongest little dude, so I can't wait for him.”